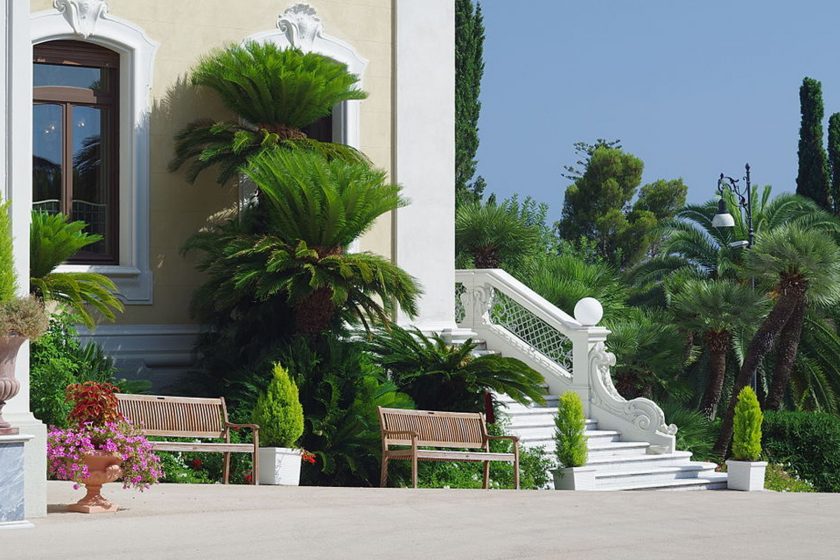 The Balzi Rossi, close to the French border, is the most important Ligurian archaeological site with spectacular caves perched on sea where man used to live in the Paleolithic Era and whose traces are preserved in the Prehistoric museum.

The Villa Hanbury Gardens boasts 18 hectares of splendid subtropical plants from all over the world. The extensive botanical gardens, Italy’s largest, surrounding the former villa of Sir Thomas Hanbury are built on a slope extending almost to the sea. Hanbury Gardens are a few kilometers outside town, reached by car, bus, or taxi.

In nearby Sanremo, old railway tracks have been converted into a traffic free, coastal path, used by walkers, roller bladers as well as cyclists. The path is 20 km long and runs from Ospedaletti to San Lorenzo al Mare along the seafront. It meanders through the delightful town of Sanremo, then down the coast. There are plenty of spots along the route with benches where you can rest and enjoy the scenery and places to stop for refreshments. There are several places where you can hire bicycles but the easiest place to pick one up is directly opposite the old train station in San Remo, close to the coastline and the old town.

When you’ve had enough of the beaches and palm trees, head to the mountains to experience an alpine ambiance and a different kind of Italian charm. Limone Piemonte is a skiing & snowboarding resort with ample amenities, also a great place for mountain biking and hiking outside of the ski season (December until April). It can be reached by car in around 1.5 hours or by train in under two hours. 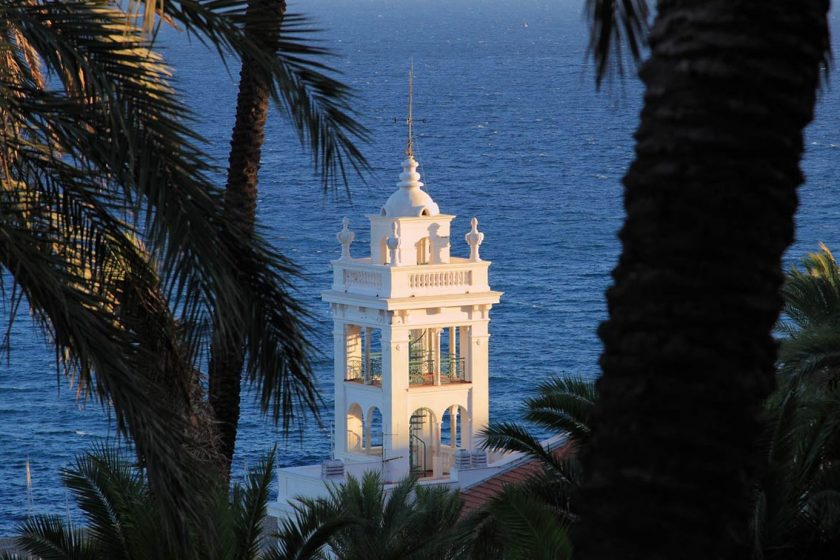 There was a period at the end of the 19th century, during which the English guests of Bordighera, staying at  the Hotels and villas hidden among the olive trees, were as many as 3,000, outnumbering the local population which at the time amounted to around 2,000 inhabitants.

This extraordinary touristic “colonization” of Bordighera, was brought about mainly by a number of wealthy British families, who had chosen this part of Liguria for their winter sojourn (while other subjects of Queen Victoria preferred other resorts along the Riviera, from Cannes to Alassio) and this was due to the publication of a book in Edinburgh, in 1855, titled “Doctor Antonio” by John Ruffini, which enjoyed widespread popularity at the time.

Having been discovered for its natural beauty, for its luscious flora, for its excellent climate and its numerous peaceful hillside walks among the olive trees and palms, (it has been estimated that the Old Town was surrounded by no less than 50,000 olive trees and 20,000 palms, later sacrificed for the construction of roads and buildings and by the sales of the most magnificent palms to other cities), Bordighera had rapidly become an exclusive, first-class residential resort, even competing with Nice and Menton.

The English had created a real British centre here, with their own banks, agencies, shops, sport-clubs and cultural centres, the Anglican Church, the theatre (“Victoria Hall”) and also a weekly paper in English, imbuing the place with an atmosphere of gentlemanliness and refinement to the area. Many guests came from other European countries too.

The majority of buildings of that period still survive today, enhancing modern Bordighera with a prestigious cultural tradition, thanks also to the Bicknell Museum and the International Municipal Library. The Tennis Club is still very much in use today, it was indeed the first established Tennis Club nationwide, with 20 tennis courts (much reduced in the post-war period) and the Bridge Club as well.

One of the most important person of that world is undoubtedly Clearence Bicknell. At first a Protestant minister, then patron, a most able and sensitive scholar, a refined water-colourist, a promoter of Esperanto, an expert botanist, but above all, an indefatigable explorer and discoverer of the prehistoric Rupestrian engravings in Mount Bego, near the Maritime Alps. He became the founder, in 1888, of the first museum of Western Liguria, which still carries his name. There, in his Anglo-Saxon-come-Mediterranean building he placed his collection of archeological objects of great value, side by side with his rich collections of Natural History, which was later given to various Ligurian museums, according to the place of origin of the items.

He published two important volumes on the local flora and some essays about the Rupestrian engravings of Mount Bego, the last one in 1913.

After Bicknell’s death in 1918, the Institution passed to his grandchildren, Edward and Margaret Berry, who used it as a centre for comprehensive historical-artistic studies, and which resulted in the publication of a valuable guide: “At the Western Gate of Italy”. While Europe was heading towards a new and terrible war, and the social-political transformation of the times had changed the fortunes of the British Empire, a golden era had come to its close also in Bordighera, at first with a temporary and then a definitive abandonment of the city by almost all the English families.

But there remained the heritage of their work, the style of the city, which has now completely but probably unconciously got assimilated. After a brief period of uncertainty, the Bicknell museum became the “History Home Deputation” and susequently “The International Institute of Ligurian Studies”, which still continues today. A centre for activities, functions, and most importantly, a place of Universal Archeological specialization, equipped with a most comprehensive reference library on all aspects of the Ligurian territory, from archeological, to artistic, historical and nature-related.

The International Municipal Library, a meeting place for very different readers, has recently overtaken the function as coordinator and promoter of the town’s cultural activities, re-cataloguing the impressive number of books (many volumes are in English and they are now on CD-ROMS as well, viewable on line); and encouraging conferences, concerts, shows, debates, periodically receiving big groups of fans. At the end of 1999, the number of subscribers enrolled were about 4,000. The ancient spirit continues to uphold its primary aim: “elevating” the social and moral code of all through culture and learning.

Recalling the English Institutions of Bordighera, doesn’t do justice to the other important heritage, left to us by numerous individuals who loved the city and made their own valuable contributions. For example, Frederic Fitzroy Hamilton authored the book: “Bordighera and the Western Riviera”, also translated into French; a fundamental and fascinating study of natural history of the region with reproductions of documents regarding the  foundation of “Burdigheta” in 1470 -71. And there was Mr. Lowe, who gave as a present to the city the gardens bearing his name in Via V. Veneto, so that the age old olive trees could remain in public ownership.

Modern Bordighera came from all of these and other various facts and from by-now forgotten episodes. It was, however, the cultural and touristic tradition of the British upper classes that provided the main reason for its fortune.

The texts have been taken from “Bordighera and the English”  by Enzo Bernardini.
Translation by Manuela Borella and Veronica Noach-Kas.

Ventimiglia offers holidaymakers a variety of beaches. Beach Trento e Trieste is an expansive pebble beach close to the city centre with easy access to all sorts of facilities – from bars and restaurants to sun loungers and parasols. The Spiaggia dei Balzi Rossi is surrounded by red cliffs and wild plants and flowers. The sea here is particularly beautiful; its sloping sandy seabed is very popular with scuba divers and snorkelers. Don’t miss the Calandre Beach, a couple of kilometres from the centre of Ventimiglia: soft and golden sand, reached on foot along a charming and well signposted path through scented Mediterranean maquis. Don’t forget your board, since surf’s up on breezy days!

Whale watching boat trips run from neighbouring Bordighera from June until the beginning of October. The excursion lasts some 4 hours from when the boat heads out towards the watery horizon. The idea is to sight and observe a wide range of resident mammal species in their natural habitat, the International Cetacean Sanctuary.

The NO STRESS TEAM organize windsurf, canoe, catamaran and surf courses on the beach in nearby Bordighera from April until October. This is ideal for those who want to enjoy a beach holiday with fun activities. AMB Sportshore in Bordighera also rent out jet skis and a variety of boats. A perfect way to discover the splendid wonders of the Ligurian coast. 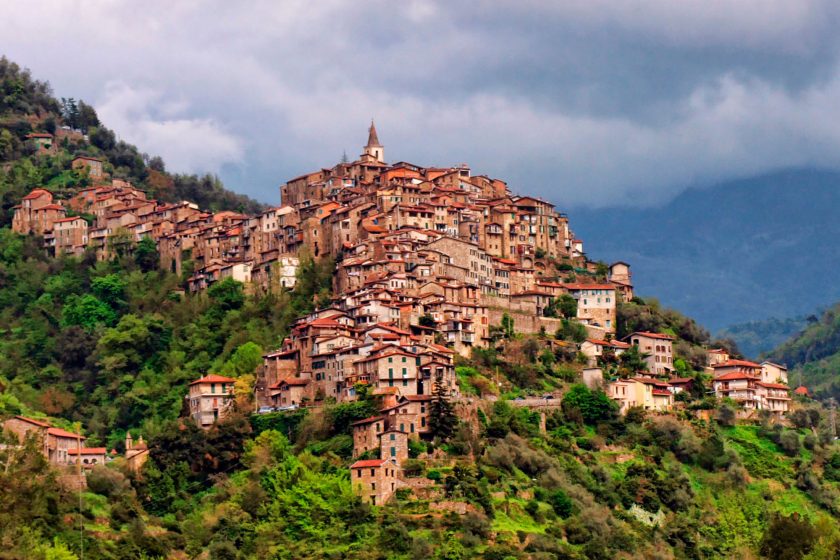 The valley of the Nervia river (more colloquially known as “Val Nervia”) is located just behind the eastern sections of Ventimiglia, with a winning combination of beautiful scenery, picturesque medieval villages and delicious Ligurian food.

Dolceaqua is a place that inspired many artists including Claude Monet and is well known for its fifteen century Doria castle and its humpbacked bridge. This is the area where Rossesse wine is produced. Head to the vineyards of Terre Bianche in the hills above Dolceacqua to sample some local speciality wines. Don’t forget to have a look at craft products made of olive wood.

A visit to Rocchetta Nervina is a great alternative to the beach. Here there are natural pools of mountain river water where you’ll get the most refreshing swim, surrounded by the lush Ligurian hills. They’re unspoilt and still to be discovered by most tourists. It is a great spot to picnic, although there are restaurants in the village centre.

Apricale is one of the prettiest villages in the region, with fantastic restaurants and the sunniest piazza. Apricale has a lot to offer; a 12th century castle, a museum, several lovely churches and beautiful wall murals dotted around the village. The village centre is free of modern transport although there is plenty of parking space on the periphery. The surrounding countryside is very popular with hikers and cyclists.

Pigna clings to a hill, with narrow little streets in bare stone; there are climbs to be made on foot and flights of steps that lead to the top of the village: The Loggia of Piazza Vecchia (15th century) is a panoramic natural balcony over the green valley. A little outside the centre is the San Michele church, where there is an exceptional Renaissance polyptych by Giovanni Canavesio.

The peaceful village of Bajardo awaits you. Steeped in history and atmosphere, the village offers breath-taking views over the Maritime Alps. One of the main attractions are the ruins of the old Church of S.Nicolò, where hundreds of the village’s inhabitants lost their lives when the church collapsed on them during an earthquake in 1887. Bajardo also hosts a popular annual druid festival. 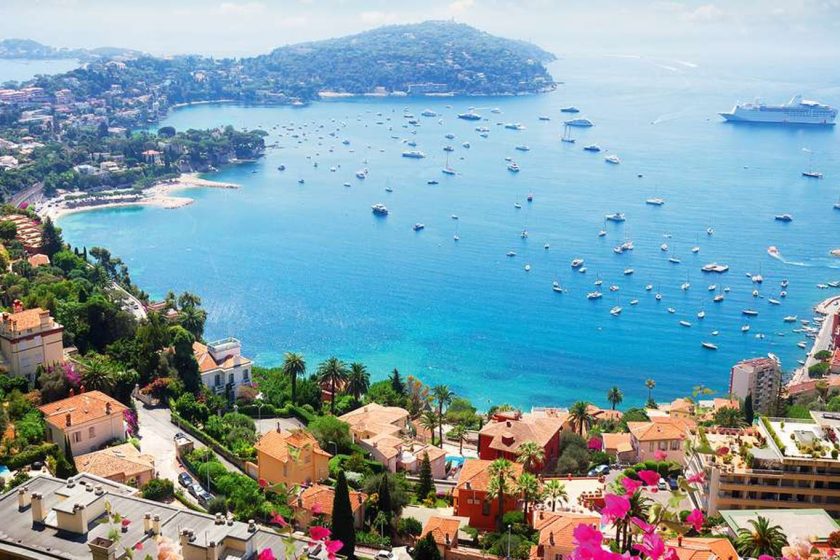 The French Riviera (or Côte d’Azur) is the Mediterranean coast of South Eastern France. It includes famously glamorous beach resorts such as Saint-Tropez and Cannes, the bustling city of Nice and the independent microstate of Monaco.

There are trains departing Ventimiglia station regularly, making it easy to explore the region. In fact, you can reach Monaco by train in just 30 minutes!

The Italian Riviera is a stretch of coastline home to an enchanting mix of history, pristine beaches, panoramic views and mouth-watering regional cuisine. Lovers of la dolce vita, artists, writers, celebrities and royalty have been flocking to this glamorous destination since the 1800s—and it’s easy to see why!

There’s something for everyone: picturesque hiking or skiing in the mountains, music and glitz in Sanremo, the pretty pastel-painted coastal villages of the Cinque Terre, open air markets in Ventimiglia, and dozens of quaint waterfront towns along miles of clear blue water. The capital city of Liguria, Genova, can be reached by train from Ventimiglia in around 2hrs. Offering both splendour and an undiluted sense of history, the city is rich in art and notable architecture, with a revitalized port designed by one of the best-known architects in the world.